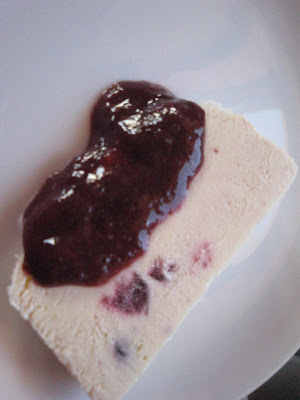 I love to have something special hidden away in the freezer in case of unexpected guests - or even expected guests and no time!!  I wholeheartedly recommend this semifreddo for such an eventuality (or for any eventuality, or even "because we're worth it"!!).  It is really scrumptious!

This recipe originated in Catherine Fulvio's delightful new book Catherines Italian Kitchen, the photo looked so appealing  that I had to give it a go.  Then a little light pinged in my head, and I thought of the wonderful  Choclette and her pal Chele's new competition We Should Cocoa - where they asked us to come up with dishes containing chocolate (of course) and this months special ingredient Raspberries.  Bing, bang, bosh with some changes to the original (which is titled Limoncello, White Chocolate and Cherry Semifreddo) I have come up with this recipe - somewhat lower in calories than the original, but really, really good despite this!!

Chop up the cherries and place in a bowl with the raspberries and half the sugar.
Whisk the cream and the other half of the sugar until soft peaks form, stir in the liqueur and the yoghurt.
Fold in the fruit and the chocolate.
Pour into the tin  and smooth the top, cover with more cling film and freeze.
The semifreddo should be frozen for at least 6 hours and for up to 3 weeks.

When ready to serve make the coulis:

Place the fruit, liqueur and sugar in a saucepan and heat gently until the sugar dissolves.
Allow to cool.
Blitz with a stick blender (if you wish)
Press through a nylon sieve to remove the pips.


Remove the semifreddo from the freezer an hour before serving - keep it in the fridge.
Remove the cling film and drizzle with the coulis.
Serve and enjoy!
Posted by Brownieville Girl at 7:13 PM

Kitten with a Whisk said...

I've been wanting to make some kind of semifreddo all summer. So yuumy!

This semifreddo looks and sounds so lush! Great combo of flavours.

Oh, yum! I don't think it would be easy to leave it alone in the freezer. It might get lonely! lol

Maria - the cherries and raspberries worked very well together, and everything works with cream!!!!!!

Oh Lordy, I daren't make this...my waistline is FAR TOO BIG as it is! Mouth watering as I write...

I'm with Rose, my gut is stretching at the mere mention of double cream! You are very talented to just whip something up..I might have been tempted to call for a take away *hangs head in shame*

This is something I've always wanted to try! This recipe sounds gorgeous, super fruity and refreshing!! Thanks for posting

looks damn fine... what's the one you pour coffee onto? i want you to make that next...

Rose - a little of what you fancy does you good!!!!

LC, don't think I don't succumb every so often!!

Thanks a million Sommer - you should give it a go - it's so easy!

Wow! This looks wonderful - a very impressive dessert to pull out of the freezer for guests.

That looks great! Love your blog!

Holy cow!!! What a fabulous dessert. You did a great job with this one.

I recently made a semifreddo for the first time and it is now a staple on my dessert menu! Yours sounds heavenly with the raspberry...yum!

This has got to be on my list for next summer - an inspired semmifreddo and it sounds delicious. Thank you for taking part in the challenge and thanks for being so kind.

BRILLANTE - our Summer is just around the corner - and sitting outside under our tall Jacarander trees with friends on a barmy night- with a glass of something suitable and a white plate with this dessert on it sounds just PERFECT.