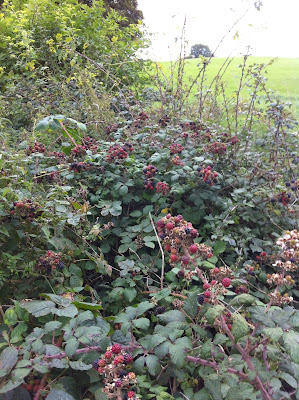 Season of mists and mellow fruitfulness - been dying to use that line!!!!  But seriously Autumn really is an incredibly fruitful season, particularly when it comes to foraging for free food.  Although I was thinking that if you were counting man hours, and were charging yourself minimum wage this "free food" would be quite expensive!!

I have spent many hours devising a list of to do's for foraging the hedgerows, this is my considered offering!

1.  Do not go blackberry picking wearing your MBT's, you will be unbalanced and unable to reach as far for those elusive big fat juicy ones.

2.  Do not wear your new MBT's as you could head into a big pile of muck while reaching for a huge bunch of elderberries and totally ruin those shoes.

3.  Do not go blackberry picking when you have a hand modeling audition (not that I actually had an audition, but wouldn't be a good idea if you had!!!!!) 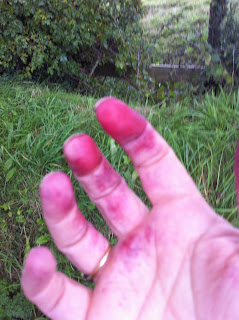 4.  This is probably the most important one .... After blackberry picking, do not under any circumstances visit a friend  in hospital and use the alcohol wash at the entrance ..... you will be very, very sorry if you do. (and embarrassed for whelping in pain when there are actual sick people round about!!)

5.  Wear heavy jeans, not a light pair of tracksuit bottoms - those nettles hurt!! 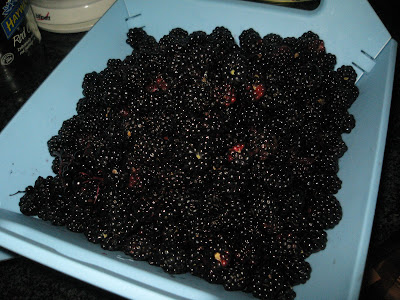 My first days blackberry picking resulted in a large blackberry and apple tart, which went down really well ...... so well in fact that about twenty minutes after I photographed and served the tart - 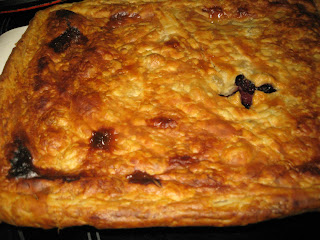 This is all that remained!!!!!  Well this empty dish and three very guilty looking people! 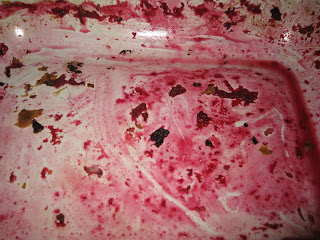 I also picked some rose hips, and having read on the internet that rose-hip syrup is absolutely magic stuff when it comes to attacking colds and flus I made a vat of the stuff! -  I gave it to son #2 last weekend when he showed flu like symptoms, he still missed school this week, so I won't be marketing my syrup any time soon!! 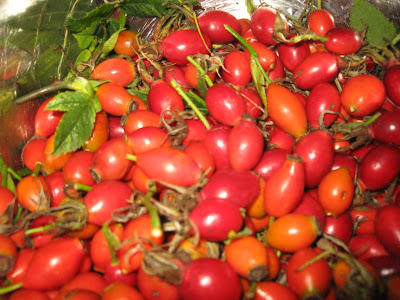 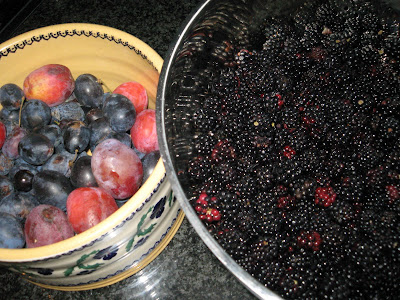 My next day's foraging yielded a huge bag of blackberries and some damsons and plums.  These blackberries ended up in a bottle of vodka - Nigella's blackberry vodka to be exact (I'll let you know how that turns out at Christmas) and a Blackberry and Lime Cake,  this cake is based on Sally's Lemon Butter Cake which I put on my "to try" list , then I read about it again on the wonderful Tea and Wheaten Bread blog Here (this post pushed it well up the list!!) and then I read EmmCee's enthusiastic Yum, Yum Post and I made it that day.  Sally's original cake was flavoured with just Lemon, but I wanted to use my (hard won) blackberries and I thought that Lime would be a good combination, and I was right, I can only quote Emmcee "Yum Yum"!!

I have (as usual) made some changes - this is how I liked it, but please look to to the other versions and choose your favourite. 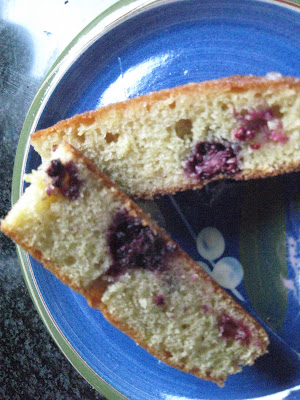 Melt the butter in a large pan.
Add the sugar, combine well.
Add the flour followed by the eggs and the lime zest.
Pour half the mixture into the tin and spread out as evenly as possible.
Sprinkle the berries over the mix and then spread the rest of the cake mix over the berries.
Bake for 20 to 30 minutes.

When the cake is cooked (skewer comes out clean) throw together the drizzle, by just mixing the lime juice with the 50g sugar.  Pour this over the hot cake (I used a pastry brush to get it everywhere)
Cool on a wire rack.

*I also made this cake with orange zest and juice, also wonderful, but I think the lime has the edge. 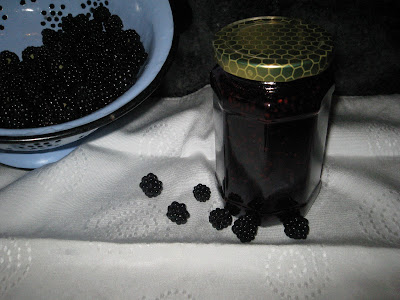 The queen of  foraging would have to be Darena Allen, and I have been turning to her book Forgotten Skills of Cooking with each new fruit collected.  I used her Raspberry, Boysenberry, Tayberry or Loganberry Jam recipe to make some Blackberry Jam (I know!!) Yet again I have changed the recipe, but I think it turned out very well!

Sterilise your jars by washing thoroughly (I pop mine in the dishwasher) and then heating at 150 C for at least 15 minutes.

Pour the sugar into an ovenproof dish and heat gently in the oven with the jars (same heat, same time).
Put the berries into a large wide stainless steel pot, mash and then heat for about 4 minutes until the juices begin to run.
Add the lemon juice and zest.
Add the warmed sugar and stir over a low heat until fully dissolved.
Raise the heat to bring to the boil and cook steadily for 5 minutes, stirring constantly.

Test if the jam is set by putting a small blob on a plate you have had in the freezer,
Press the jam with your finger, if it wrinkles it is set.

Remove from the heat, skim and then pour into your sterilised jars.
Cover immediately. 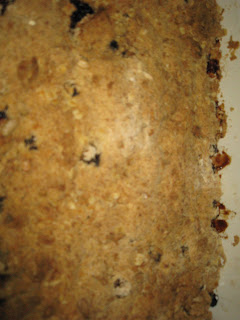 Also made a blackberry and apple crumble. 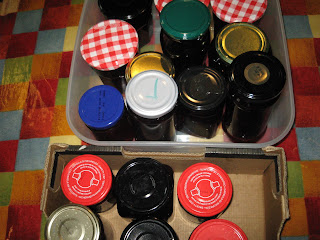 And jars and jars of apple and elderberry jelly (word of advice - buy a proper jelly maker stand thingy, and don't try the upturned stool method, I spent hours cleaning up apple and elderberry juice!!!!)
Also made some damson, plum and apple jam, and some blackberry vinegar.
This weekend's project is some sloe gin .... can't wait for Christmas!!
Posted by Brownieville Girl at 11:46 PM

What lovely look your goodies! I love pick blackberries is the best!
I love autumn but now we are in Spring (a curious spring of course) love your pictures! and your jars ! gloria

Excellent post - you have been busy. You make me want to head out into the country and bring home baskets full of fruit - unfortunately it's not possible around here!

You have been busy! You have to love it when you make such a gorgeous tart and nothing remains after. The sign of a talented baker, my friend.

Wow you have been a busy bee. I give in. What are MBTs? Your blackberry picking really does conjure up a vision LOL. The rewards are superb though. That cake seems to be a great base for tweaking doesn't it?

BG, thank you for reminding me, we have an abundance of blackberry bushes and cobnut and damson trees here, will have to go hunting when I get a chance! Great advice too...loving the ribena berry hand look ;-)

Thank you Gloria, Arista and Bridgett, you are very kind.

Granny - MBTs are my fancy smancy runners - they are supposed to make your bum look smaller!!!!! Actually they have cured my shin splints so I love them!! (although not so much any more since they are grubby looking). You are right about the cake, just fantastic!

Everything looks delicious! You'll have to remember to let us know how that blackberry vodka turns out! Have a great day!

Oh balckbarries, yummy and a natural colour for icing!

Wow sounds like you made a lot! I love seasonal fruits.. it makes baking a lot more fun!

Blackberry picking can be fun but painful too! All your goodies look delish.

Super, it was worth your troubles in finding the elusive blackers. Great work :-)

I wonder why the hand wash at the hospital made your hands sting?! I also love the "forgotten skills" book, she's a superstar!

Thanx for dropping by...

Beautiful space you have with awesome recipe collections...amazed with your excellent clicks and presentation...

Am your happy follower now..:)

One of my favorite recipes is for a blueberry crumb cake and has a lot of lemon in it...it's great with blackberries also, but your recipe inspired me to try it with lime instead!

And thanks for the berry-picking tips. :)

LOL, I am cracking up over the hand modeling joke - glad to follow your blog myself!

Wow... you've been busy foraging. I love the blackberry recipe!!!

OMG, I'm so jealous! How I wish we have berries picking season here too. Everything look so scrumptious with the fresh berries. Btw, are those wild berries? Hope you're enjoying your day.
Cheers, Kristy

Goodness everything looks so delicious.....Wonderful to make good use of hedgerow fruit. Lucie x

Whoa! Busy lady this week! Hope you have plenty of shelf space for all your jams and preserves! Love the idea of blackberry vodka! Christmas at your house must be yummy (and slightly intoxicating!) =)

Debra She Who Seeks said...

Thanks for popping by my blog today -- always nice to meet another Margaret Atwood fan!

I'm so jealous. I wish I could find a place to pick blackberries. I don't think I can find that in FL. Looks like you found lots of ways to use them! Everything sounds good. Can't wait to see how the vodka turns out!

Georgia | The Comfort of Cooking said...

Ha ha, sorry about the stained fingers, but this jam looks well worth the stains! I've been collecting recipes for jams to try, and this will definitely be on my list!

Thanks everyone for the kind comments, I really appreciate them.

Kristy, yes all the berries etc are wild - bumper crop this year the hedgerows are laden!

Angie, a small carton of blackberries is E3.49 in the supermarket at the moment - I don't understand why there aren't more people out picking!!!

Promise to update on the vodka!!!

so, so good! We had lots of wild blackberries this year too after a very wet springtime. The berries fetch $4 or more in the grocery so I'm glad we have several patches. I'm enjoying your blog so much!

u have got fabulous recipes!i too love blackberry picking and have made a cake which was just out of world...blackberry and peach crumble cake....have a peek at my bloggie if u want to try it out....u wont regret:)....have some in freezer, yet to make something..:)..