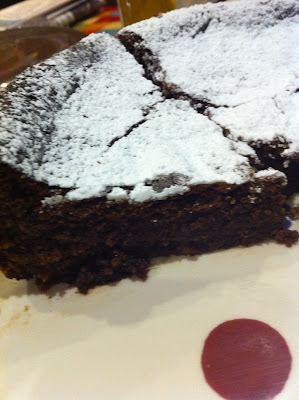 Apologies for the awful photos, they were taken when I was dashing around like a mad thing (and a glass of wine might have been involved)!!!!

On my post about the book club night I mentioned that I had baked another birthday cake,  thankfully it tasted an awful lot better than it looks here!  This is another recipe from Nigella's Kitchen, the Flourless Chocolate Lime Cake.  It was very well received by my fellow bookclubbers, everyone said that they really liked it (of course they were hardly likely to say it was terrible!!), my family on the other hand were not so enthusiastic, and found the lime an odd partnership with the chocolate.  I have to say that I enjoyed it, and particularly enjoyed the fact that it was just that little bit different. I promised Lisa that I would blog about the cake (she really liked it), and I am happy to oblige. 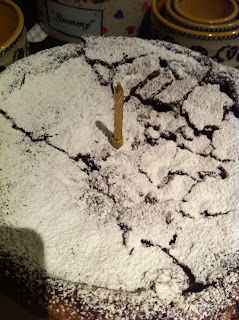 As you can see my version of the cake cracked badly when I took it out of the tin (and there was I feeling all proud about my non sunken loaf cake - pride, fall etc!!), I'm sure that anyone with any dexterity would manage no problem! 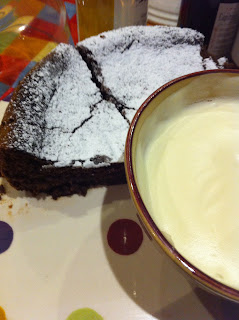 I had to play around with the accompanying Margarita Cream as I had no Tequilla, so it became a lemon and lime cream, I added lemoncello and some lime extract to 250ml cream and 50g icing sugar - it was delicious!  And the leftovers (which I forgot about and had gone slightly sour when I spotted the tub at the back of the fridge!!) made my best scones ever.

Melt the chocolate and butter in a bowl over a pan of simmering water.
When melted allow to cool slightly.
Beat the eggs and sugar until pale and moussy - about 5 minutes in a freestanding mixer
Fold the almonds  and sifted cocoa carefully into the egg mixture.
Then fold in the chocolate mixture, and finally the lime zest and juice.
Pour the mixture into the prepared tin and bake for 40 -50 minutes, until firm on top and still slightly wobbly underneath.
Remove the tin to a wire rack to cool.  After 5 minutes cover with a clean tea towel (this prevents the cake being too crusty).
When cold, remove the cake from the tin - carefully!
Dust with icing sugar and serve with a tasty cream.

Now I love chocolate limes so this is a combination that appeals to me.
o, would you recommend Nigella's Kitchen? Bear in mind I already have How To Eat/Express/Domestic Goddess.

PDNFTA, I think that I would buy Feast before Kitchen, although I love the way Nigella writes and have all her books!

I really enjoyed the margarita cream when I made it last but I like your idea of the limoncello in there. Brilliant. I will have to give this cake a try as well. I actually like how it is cracked on top. Gives it a lovely homemade feel too it.

oh the addition of lime sounds fantastic! i have loads of fresh citrus in the garden and always appreciate a new recipe :)

You are very kind Bridgett!

FFT, I can only imagine it being warm enough to grow citrus - it's so, so cold here at the moment!!

Oh my goodness I think I just arrived in heaven. That sounds wonderful

i love coming back here for my chocolate fix! you are awesome. thanks for sharing.

I think I will be getting very round with all the chocolate lol I love it! I don't think I thought to try chocolate and lime together. It looks awesome no matter what.

Have got to get my hands on this book before it kills me!!!! HURRY UP SANTA! I think it looks pretty tasty, glass of wine or not ;0)

What an interesting combination. Chocolate and Lime. I have to try this one. Your pics look good to me and I really wish I had a piece of your cake. It really looks yummy!:)

wow... imperfection in the shape of sunken chocolate and lime... small sparks of genius coming from across the water...

Mmmm, cracks or no cracks, I'll bet it was delish! What was the wine? LOL!

I think I might like this cake. The best brownie I ever had contained lemon and I am still trying to replicate that. So lime and chocolate might be a winner for me. I will just add it to my long list of recipes to try. I think you probably improved the cream with your alternative ingredients, as I did read some of the comments on the Cookalong on the new N.com and some people were not a fan of the cream. I like the sounds of your cream!

Thank you so much Granny!

BBKD - I am going a bit overboard on the chocolate recently - the waistline is suffering!!!

Very kind of you Tassie!

It's all in the anticipation Chele!!!

Jutta, interesting on the Margarita cream not being poopular, because I love her Margarita ice-cream! The Lemoncello was really good in it though!!

I would never have thought to combine chocolate and lime. I combined coconut and lime successfully recently though!

Interesting! I've never really thought about putting chocolate & lime together. But it does look very good(:

LC - I love lime and coconut together, recently lad a coconut cake with a lime drizzle ... Yummm!

Danielle - it is an interesting combination, some people really loved it

I think this is a dangerous one! haha.... I can never resist even just to look at it. I think I'll never be able to lose weight before X'mas! However, have a fabulous weekend, sweetie!
Kristy

the powdered sugar looks amazing on it!!

I would have never thought to put lime and chocolate together. I will have to try it.

It's a wonderful cake and flourless chocolate cakes are meant to crack - shows how good they are ;)I love chocolate and lime - shame I wasn't there because this sound pretty much like heaven to me.

Love flourless cake! This one looks delicious. The lime is an interesting addition...sounds good.

The cake looks lovely, i think a crack adds to the appeal of home cooking :) I haven't spotted that recipe yet in Kitchen, have only cooked a few dishes from it so far. Must try that as I luv both Chocolate & Lime.. Vick x

I think the crackes are ok, they are the typical flourless cake features. LOL. I'm not too sure my family will like lime and chocolate too. Like what you said, they are ok but I think they will not as good as lime and coconut or chocolate and raspberry...that kind of typical combinations.

Margarita Cream...or lemon n lime cream...is a pretty unique accompaniment to chocolate cake. And you can never have too much chocolate cake!

Checkout my blog I passed on an award to you!

Kristy, every morning I intend to cook only low fat food for the day - that lasts about 2 hours!!!

M & M - hope all going well with the afternoon tea.

You are right Katherine, nobody minded :-}

Indie - I suppose a chocolate cake is bad enough on its own!!! But the cream was lovely!

Tessie - thanks a million!

Oooh, lime and chocolate? What a cool combination! I bet the citrus really brightens up the chocolate-y flavor.