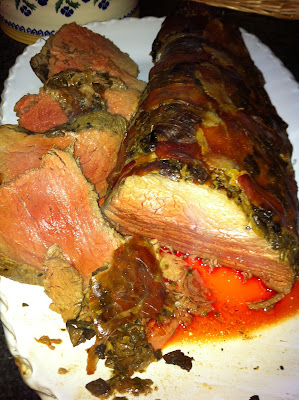 ﻿I was away on my annual "Girls Weekend" recently - it's just the best thing.  We spend a weekend eating good food (and plenty of it!!) and drinking fizzy wine, but most importantly chatting.  Actually it has been called the "you're great ... no you're great .... no you're great ... we're all great" weekend.  The cheapest, and funnest (!) therapy of all time.
When we were taking a break from telling each other how great we are (seriously!) the conversation turned to food, and special occasion food to be exact.  I was telling the girls about my favourite special occasion meal, and they asked me why it wasn't on the blog - good question.  This to rectify my glaring omission!
I first saw this recipe on T.V. and I'm pretty sure it is a Jamie Oliver dish, although it has probably evolved a fair bit over the years.  It's definitely a special occasion dish as the fillet (tenderloin) of beef is so expensive - but it is always popular, it's easy to carve and the left-overs are just heavenly.  Another advantage is that if you are cooking for a large number of people the meat will have different levels of "doneness", the thin end will be well done whereas the Chateaubriand will be rare, with medium meat in the middle.  If you are cooking for a smaller number of people you can use a smaller fillet (or perhaps two pieces of fillet one that you cook to well done and the other to rare), the herbs, mushrooms and parma ham, impart a wonderful subtle flavour the the tender moist meat - it's the business!
Special Roast Fillet of Beef

Soak the porcini mushrooms in boiling water (for at least 1/2 hour)
Heat a large frying pan and add 1 tbsp oil - sear the meat on all sides and leave aside.
Add the rest of the oil to the pan and add the sliced  fresh mushrooms and the chopped garlic - cook until tender and add the soaked procini mushrooms which you have also chopped up finely.
Add about 200ml of the soaking water and simmer until it has reduced by half.
Add the lemon juice.
Lay the parma ham out on some greaseproof paper - you want a large sheet of ham (without holes) big enough to wrap the meat.
Spread the mushroom mixture over the ham.
Pat the herbs into the meat and then place on the sheet of ham and mushrooms.
Wrap the beef with the parma ham and tie with strings.
Place the beef in a roasting tray and roast for about 40 - 50 minutes.
Halfway through the cooking time add the wine to the baking tray.
When the meat is done remove it to a serving plate and allow to rest for at least 15 minutes.
Simmer the pan juices and serve as gravy.

Posted by Brownieville Girl at 6:07 PM

Its a good way to spend a weekend. Better than any feel good movie I tell ya :) This is an really no-vegetarian dish. But looks real yumm :)

Sounds Amazing!
My husband would LOVE this meal :)

Wanted to invite you to share it at a weekly event I host titled Seasonal Sundays! It fits the theme quite well. (http://realsustenance.com/)

Hope you have a wonderful weekend!
-Brittany-

I'm a true carnivore and I am salivating!

Oh I love that kind of gathering with friends. That joint of meat looks incredible. Simply incredible. What a special treat. I need The Viking to go out for the weekend and then invite you over to eat this with me!

I can't access your profile Brittany - will try again!

OMG, my mouth is watering! Can I join you and Dom? LOL!!! Hey, what kind of and how much wine?

what a fun weekend, this looks just amazing!

Looks and sounds amazing! I wish I had some in the oven right now.

Oh - it looks amazing and I am now sooooo hungry for beef. Yum.
Love the sound of your weekend too. I'll need to set up a "you're great" weekend with my lot!

This would be my favorite meal as well! So glad it made its appearance on your blog as it looks heavenly. Glad to hear your girls weekend was a blast.

Such a nice way to spend time with your girl pals. If I ate red meat then I reckon I would really like this recipe, it does actually look pretty yummy!

There's no therapy like girlfriend therapy. Glad you had fun!

OB&CS - come along - the more the merrier!
Have amended the ingredient list - sorry about that!!

Oh yum. I am definitely a beef girl. We try not to eat too much of it. This looks delicious and we love parma ham. Thanks again this recipe is a keeper for sure.

art is in the kitchen said...

Wonderfully cooked beef! The parma ham and porcini makes this the ultimate tenderloin recipe, I have to say! Got to make this for that Mediterranean eating experience pronto! Cheers!

This looks soooo good. I like the pool of blood on the plate. Just adds to it.

Your weekend sounds fabulous. Nothing like time with the girls to lift your spirits!
The beef sounds and looks amazing!
Believe it or not I've only just found your blog, it looks great! So I'll be following.

From the Kitchen said...

Hello Brownieville Girl. I'm so glad you stopped in for a visit. Welcome! I love hearing about friends who get together and in such a delicious way!

Looks great, will give it a shot some day, have a Jamie Oliver 30-min chicken meal in oven now - my variation! By the way I left an award for you over at my blog - drop by to have a look and enjoy participating - a chance to share some things about you with the blogosphere!
Catherine

Nothing like a girlie weekend, huh? I've also awarded you with the Stylish Blogger Award on my blog. Hope you'll accept.

That looks truly special indeed. I've never tried anything like this since that cut is so expensive, but if I knew it would turn out looking that fabulous, I might give it a try!

ooh blimey that does look really tasty. That weekend sounds like a lovely way to spend time with friends.

Sounds like a fun weekend. Of course, food makes things even more fun with the girls.

Ohhhhh, I love this (and the description of your weekend away made me laugh!)