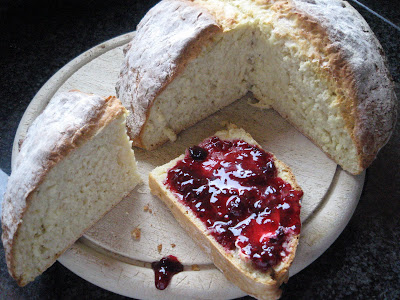 Bonanza (?!?) sorry about that - felt like a bit of alliteration and that was the best I could come up with!  Anyway I did have a bit of a bread baking marathon this weekend - you see Mr/Ms Nobody (never ever me!) accidentally turned the thermostat in the fridge way, way down, and we ended up with an oversupply of sour milk (it was organic milk so there was no way I would throw it out) hence the bountiful bread baking (I am going to have to stop this).

A very kind and generous friend had given me Darina Allen's "Forgotten Skills of Cooking" for Christmas, which I am really enjoying, I know her tone can be a bit home economics teacher, but she really knows her stuff.  I love some of the little touches in the book - being told to "fill the bowl with cold water so it will be easier to wash later" really appeals to me.  So far I have used it for jam and pickle recipes mainly, but thought the glut of sour milk was my chance to tackle the soda bread section.  I made the White Soda Bread, Beginner's Brown Soda Bread, Mummy's Brown Soda Bread and Bastible Bread - told you it was a marathon!!!

The Bastible Bread was probably the most interesting of the batch (pun not intended!!), I really love the No Knead Bread by Jim Lahey - which is baked in a lidded heavy casserole in the oven, so when I saw a soda bread using this baking method I had to try it - the outcome was really really good, the crust is softer than a normal soda bread and the bread has a spongier texture.  Darina sometimes cooks this in an actual bastible (over the fire) but that's a step too far for me - and anyway the oven version tastes great.

The white soda is just your standard bread recipe, it can be found in many cook books, not that that is a bad thing - there is a reason that it appears time and time again - it is good!  It is also wonderful toasted for a day or two after making.  It was great toasted with chutney and cheese.

I found "Mummy's Bread" a bit boring and uninteresting and won't bother with the recipe here.  The Beginner's Bread was good,  I used treacle as the sweetener as I feel it adds a savoury type sweetness to the bread.  All the breads called for a teaspoon of salt in the mixture, I feel that this is too much and use about 1/3 of a teaspoon - my attempt at being healthy!! 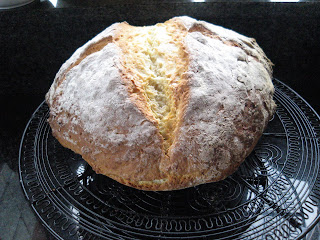 Sieve the bicarbonate of (bread) soda into a bowl with the flour, sugar and salt.
Make a well in the centre and add 3/4 of the milk.  Mix with your fingers adding more milk if needed to give you a soft dough (not wet or sticky).
Form the dough into a round shape and place on the baking sheet, it should be about 2.5cm deep.
Cut a cross into the bread - this step is important, it allows the air (and fairies!!) to escape.
Lower the oven temperature to 200 C and bake the bread for 45 minutes.
To check if done, tap the bottom of the bread - if it sounds hollow it's done - if not put it back in for 5 minutes.
Cool on a wire rack. 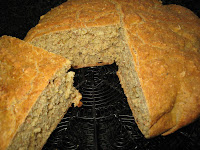 Preheat oven to 230 C, and place a heavy casserole with lid in it.

Darina tells you to line the casserole with silicone paper - but I think it would be better to flour it just before the bread goes in - it won't stick at this high heat.

Mix the flours in a large bowl add the salt and sugar and sieve in the bicarbonate of soda.
Make a well in the centre and add the milk, and mix with your fingers.
At this stage Darina tells you to tip the dough onto a floured work surface and tidy up with your hands - mine was far too wet to do this (and anyway why bother messing up the kitchen!) so I just put the dough into the prepared (with paper or flour) and preheated casserole. Be very careful here IT IS VERY HOT.
Cut a deep cross into the loaf.
Bake for 40-50 minutes,  until the bottom sounds hollow when tapped.  Again be careful of the hot casserole
Remove from the casserole and cool on a wire rack.

Put flours and salt in a large bowl, sieve in the bicarbonate of soda.
Add the egg, oil, treacle and milk and mix well - be sure to break the yolk!
Add more milk if necessary the mixture should be slightly sloppy.
Pour into the prepared tin.
Bake for 1 hour or until the bottom sounds hollow when tapped.
Cool on a wire rack.

Enjoy.
Posted by Brownieville Girl at 11:55 AM

This looks so delicious, I am loving the bonanza! Soda bread is lovely, I put them into scones and they freeze beautifully. Lucie x

Wow, the bread looks lovely - you've been really busy. I haven't made soda bread yet, I've been meaning to since I read about it on Granny's blog. I must try it.

Well, if you're going to be alliterative, at least a Bread Bonanza sounds more dainty and/or sumptuous than a Bread Bash...