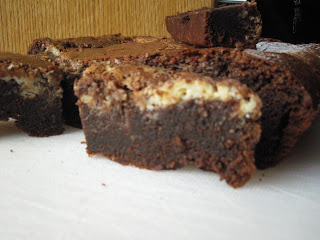 The next instalment in the "find the best ever Brownie recipe" quest.  These are Cream Cheese Marble Brownies from Delicious Magazine.  They had a fabulous texture, just perfectly moist and squidgy.  They tasted pretty good too (they had quite a strong mocha flavour), the cream cheese part didn't in any way mar the smooth chocolate hit which says "brownie" to me - it was a nice (slightly tangy) taste and texture interlude.

But all was not perfect in my brownie world, when I turned them out of the tin, this is what was before me: 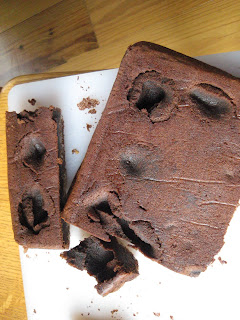 Craters!, huge (well big) chocolate craters in the bottom of my sheet of brownies!!  I don't know what I did wrong - can anyone help?  The brownies tasted fine - there was no difference in texture around the holes, I just don't know why it happened :-{

Normally the lack of aesthetic beauty would not be an issue (I subscribe to the "beauty is only skin deep, it's what's inside that matters" school of thought!) but I had made the brownies (and a couple of other cakes) for my mother who had invited a few of her pals round for afternoon tea (how civilised is that!!) and I wanted everything to be perfect.  Luckily as you can see there was a salvageable section, so I used that. (every cloud has a silver lining - they enjoyed the off cuts here!!)  The brownies were the hit of the tea - the ladies even took some home for later!!

Melt chocolate and butter in a bowl over simmering water.
Stir in the coffee and then cool slightly.
Stir in the sugar and vanilla.
Whisk in the eggs until smooth.
Add the flour and mix gently until glossy.

In another bowl beat the cream cheese until smooth.
Add the egg, sugar and vanilla and mix until combined.

Spoon the chocolate mixture into the prepared tin.
Add the cheese mixture and use a knife to create the marble effect.

*I used a double espresso made in my new toy, but that was probably a bit too strong.

** I used golden caster sugar, but you would get a better colour contrast if you used white.

Sorry about the craters but it still looks totally delic!!! :)

Isn't it always the way that when you are baking something for others it never goes quite to plan? :) These do look lovely, despite of the craters. I agree about the snow flecked brownies! Lucie x

I'm like you, when I cook for others I want it to be perfect. Thanks for the suggestions on my blog. I'm going to try your coffee cake loaf this weekend. I made your husband's favorite bread this past weekend and everyone loved it. One of my co-workers loved it so much that I gave her the 1/2 loaf I had left. The flavor is very similar to the whole grain breads here. I personally like your extra healthy bread a little better (but everyone here says it's reminiscint of pumpernickel, which I love). Instead of buying bread for our tea, I plan to make your extra healthy and your husband's current favorite and the Avoca (white) Soda bread. Any suggestions on fillings? All the breads are much heartier than what we can buy here. (sorry for the lengthy comment)

Edie, delighted you are enjoying the breads - it is wonderful to get feedback.
I love smoked salmon and/or cream cheese (and some lemon juice) with the wholemeal bread, also love ham and salad (with mayo!). My hubbie is a cheese and tomatoe man! I really love good butter and jam with all bread!!

Saffy and Lucie, probably wouldn't have happened if the brownies were just for us!! Would love to know what caused the craters though.

It could possibly be that you had too many air bubbles in the batter when it went into the oven. Sometimes when you have too much leavening in the recipe but I do not see where any was used, so that is out!
Besides that, I think they look so gooey and moist and I am glad to hear the cream cheese didn't over power the chocolate as I never have that luck so I gave up on the cream cheese brownies. As much as I love Nigella, I have never made her snow flecked brownies. My son adores brownies so I better give them a go!
Sorry you had some craters, but they sure do look delicious.

BG I do think it may be air pockets as this sometimes happens to me with cupcakes, and I have found that lowering my oven temperature and giving the tin a couple of firm taps on the work bench helps alleviate the problem.

I just made Nigella's brownies from How To Be A Domestic Goddess and I think I may have slightly undercooked them, which makes for a good dessert though. But honestly I prefer the other brownies I have baked recently by Stephanie Alexander and Hugh F-W. I am still looking for the perfect brownie recipe.

I'd 'here here' the airpockets theory. That was my first thought anyway. Unlike some other recipes, you don't really need any air in brownies, so Jutta's suggestion of the sharp taps:) In any case, these brownies look beautiful. I love Nigella's HTBADG brownies that use cream cheese, so I can imagine how these ones taste, even if it is without the coffee element for me;)

Jutta and Coby, I didn't tap before I put it in the oven (duoh!) and of course should have! I've learned my lesson!!