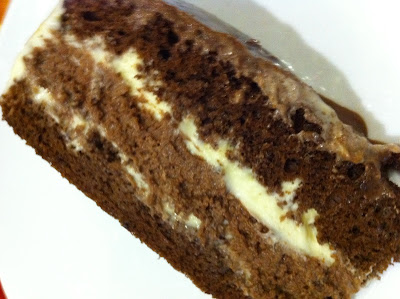 Eureka! I've found it, I've found the perfect chocolate cake recipe!  It's delicious, it's impressive and it's way, way less work than it looks, and did I mention it's delicious?

The cake itself is just a normal chocolate sponge which you slice in two (easier than baking two seperate sponges), next drizzle over some syrup and then you melt white chocolate in one bowl, dark chocolate in another - add cream to both, slap them on cover with a simple ganache - bish bash bosh - cake perfection!

Sponge
Whisk the eggs and sugar together until thick and pale
Sieve the flour and cocoa and fold into the egg mixture.
Pour into the prepared tin and bake for 20-25 minutes or until a skewer comes out clean.
Remove from the oven and allow to cool on a wire rack.

Put the milk, brandy and honey in a small pan and heat gently.

When the sponge has cooled, remove it from the tin.
Line the tin with cling film (use plenty)
Cut the sponge in two across its depth
Place half the cake back in the lined tin and brush with the syrup

Combine the milk chocolate and cream and heat gently to melt the chocolate.
Remove the cake from the tin and spread the chocolate ganache over the top and sides.


Sit back and wait for the praise!
Posted by Brownieville Girl at 10:24 PM

What a gorgeous cake. It does sound fairly straight forward. I think this a quite a show stopper. Great to serve for company!!!

Wow what a cake! I like the idea of white chocolate ganache. Definitely going to try that.

What a gorgeous recipe! I love a good chocolate cake, one that's not heavy that the children will enjoy! I love the idea of using the different types of chocolate. Yum!

Got to bookmark this! Sounds like this is an awesome cake!

Does look rather wonderful. And so quick and easy. I'm just going to have to make it to test the recipe! Poor me...

this looks great. I , like you, have been in search of the perfect chocolate cake so will have to give this a go x

Wow! This sounds fantastic. The ingredient list alone is incredible! I'd have to keep a cake like this under lock and key--and give someone else the key! :)

What a beautiful slice of cake!!!

I am so glad you haven;t kept this recipe to yourself. Can;t wait to get my oven fixed so I can have a go at this one ;0)

Ha ha, I love the way you say simple. It looks splendid, but I know with my propensity for splitting ganache, it's anything but simple. Does this mean that the quest for the perfect chocolate cake is now over?

This cake looks great! I love chocolate cakes!
You can check this similar: http://eeasyrecipes.blogspot.com/2011/03/nut-cake.html