SHERRY - NOT JUST FOR TRIFLE 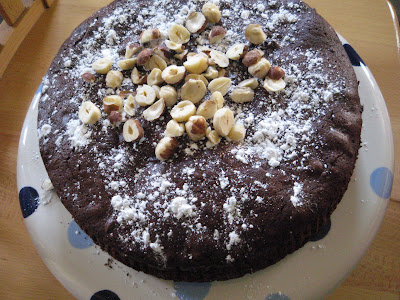 This was a densely, deeply, darkly chocolaty cake, it should have been perfection - but I overcooked it!!

I should have followed my instincts - but instead I followed the recipe!!  My oven usually takes much longer than any recipe specifies to bake anything, but in this case I should have taken the cake out sooner than specified.  I actually did check (so I can't even blame the oven- and man has that oven had it's fair share of blame heaped on it!!!).  I did the testing with the spaghetti bit - but I should have taken the cake out of the oven while it was still moist (less than a brownie but more than a cake) and not have waited until it came out clean.  Doooh!

That said, this cake is a keeper.  I served it at a party with a number of other desserts - it was a good addition to the spread.  The key to this cake is the raisiny, rich cream that is served along side it.  They compliment each other to perfection. I am trying to use some of the cook books I have stockpiled - my new rule is that I can't buy a new cook book until I have cooked two recipes from an unused one (my cook book buying rules are very similar to my diet rules in that they change to suit whatever temptation is in front of me!!!!)  This is my second foray into Diana Henry's "Crazy Water Pickled Lemons" (the Preserved Lemons were the first) and I have plenty more "post-its" sticking up waiting for attention! (I stick in a "post-it" when I fancy a recipe, not very tidy)

Melt the butter, chocolate and sherry in a bowl set over a pan of simmering water.  Allow to cool slightly.
Whisk the egg yolk with the sugar until light and glossy.
Add the chocolate mixture and 70g of the hazelnuts.
Beat the egg whites until stiff.
Fold some of these whites into the chocolate mixture to loosen it.
Then fold in the rest, alternating with the sifted flour and cocoa.
Pour into the prepared tin and bake for 50 minutes.*
When a skewer comes out slightly (very slightly) moist remove from the oven and leave to cool in the tin for 30 minutes - then turn out onto a wire rack.

* Diana says after 50 minutes "test the cake with a skewer and if it comes out clean, it's done; otherwise leave in for another 5 - 10 minutes"

Heat the raisins in the sherry in a small pan.
Turn off when just under boiling point - leave to plump up and cool.
Whip the cream and add the yogurt and sugar to it.
Add the plumped up raising and any remaining sherry.

To serve dust the cake with icing sugar and scatter the remaining 70g of  chopped hazelnuts over it.
Plate up with a dollop of  sherry cream on the side. 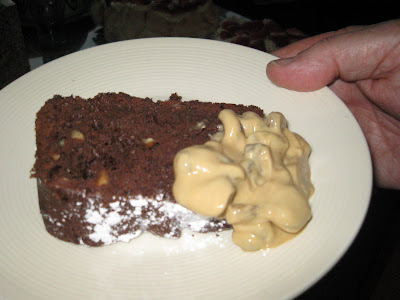 Posted by Brownieville Girl at 9:26 AM

Oh I do love Spanish sherry and to be able to use both my favourites in this luscious looking dessert is a real treat! Yum yum.

That cake sounds and looks amazing. My taste buds are pinging all around my mouth.

I love your new cookbook rule. Maybe I should try that too. I bought two cookbooks at the weekend and so far all I have done is read them in bed :)

so delicious! I really need a recipe for chocolate cake! It's our local village show soon and I want to win this year...

This is fabulous BVG! I still have sherry here from christmas - at last I have a use for it! Thanks for this super recipe! Lx

ha I have such a huge collection of recipes that I just print off the computer! They could all be their own cookbooks! Isn't it crazy how they pile up? At least you have a goal in mind per cookbook!

That does look good! I love your cookbook rule too!!! I am in a pickle because every time I read someone's blog I think...'oh, I want to make that' and now I have a list as long as my arm of biscuits and bakes I have to try!

I will never live long enough to cook all the recipes I want to. LOL. That cake and raisin cream looks wonderful. I applaud you for using Pedro Ximinez. Lovely stuff with raisins

Oh this cake sounds wonderful and it's another one to add to my list (which I keep losing). I hate it when I overbake cakes, I'd rather err on the side of not quite done to over done, but it's often hard to judge. As a general rule I'd go for a toothpick coming out not quite clean.

Okay, seriously I have to have this right now. Looks amazing! :)

Wow, I have got some sherry I had no idea what to do with..you've sold it to me! x

BG did you change your blog background? I love it!

I always set the same rules for myself but then a shiny, lovely new cookbook always catches my eye. I just need to add onto my house to keep them all! The cake sounds lovely and that sauce must be heaven.

What a wonderful desert. It looks so pretty and decadent!
*kisses* HH

All I can say is WOW with my mouth drooling! It looks so delicious! I wish you lived in New York, I would love to bake with you. My diet would be out the window!

Love your cookbook rule. I have to remember that! My husband is ready to kill me because I have hundreds. I can't help my self. I am addicted to recipes!

it still looks like it came out great....such a dark chocolate wonder!! the sherry intrigues me....thanks for sharing!