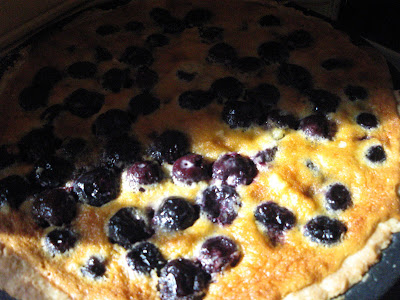 On the now defunct forum  Nigella.com, they had a cookbook review each month, I have to say that none of the books selected really grabbed my attention until Jutta chose Holiday by Bill Granger - it was a book that I had owned for a while but hadn't used, and I will be forever grateful to her as I have found winner after winner in this book, actually out of all the recipes I tried (and there were many!!) there was only one that we weren't mad about - not bad going.  The review has carried onto the replacement forum Through The Oven Door, which is a wonderful alternative set up by Jutta among others. (Although that said I'm having problems with it at the moment - I'm blaming all the new spyware we have installed!).

Place of honour goes to this cherry tart which beside tasting excellent has the easiest pastry of all time - no rolling out needed (yahaa!!!), I'm going to be using this time and time again. (recipe below) 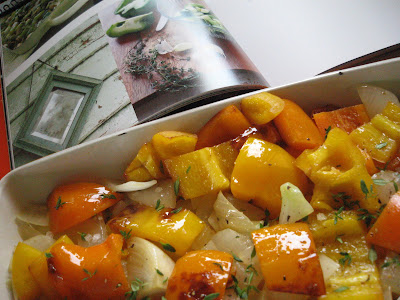 The Green Ratatouille, with some obvious replacements!!!  I'm not a big fan of green peppers, and I happened to have yellow courgettes (zucchini) in the house, it was a lovely vegetable dish pretty and tasty - works for me!! 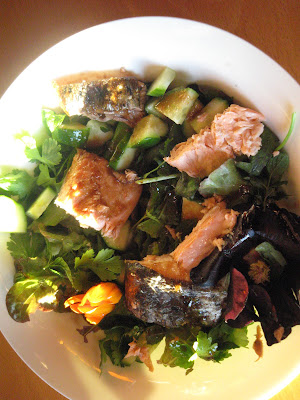 Crispy Skinned Salmon with Tamarind Caramel Dressing, the tamarind was a revelation to me, I have had some in the cupboard for some time and hadn't gotten round to trying it - boy am I glad that attempting this recipe introduced me to this wonderful flavour - a subtle bitterness, that doesn't cause the "sour lemon" face (!!) but still has that sour hit - I used the leftover dressing in a bowl of rice the next day (strange but delicious!) 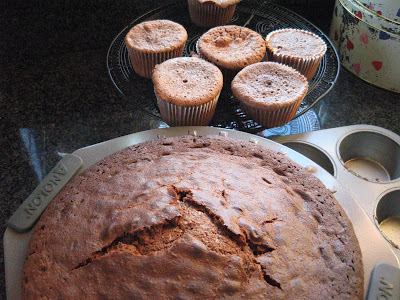 This is the Never-Fail Birthday Chocolate Cake, before I added the Chocolate Icing, without doubt the least successful of all the recipes I attempted, its biggest failing was that there wasn't nearly enough chocolate in it - a "mortler" in my book!!  (A "mortler" being our childhood term for mortal sin, ie. a biggie!!!) 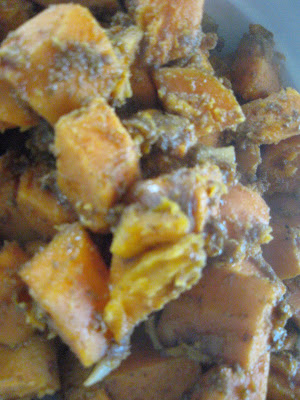 Sweet Potato with Coriander and Preserved Lemons, an unusual combination I know but it really works.  The left overs were wonderful in soup. A pretty awful picture, but this Leg of Lamb with Indian Flavours was as far from awful as you could get!!  A delicious combination of flavours served with the sweet potatoes (above) and the turmeric potatoes (below). 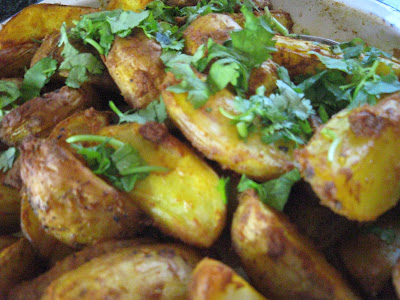 We're Irish, we eat potatoes by the sackful!!!  Any new ideas for potatoes are always welcome, this one particularly - it tastes great and with turmeric being sooo good for you, they are actually health food!! 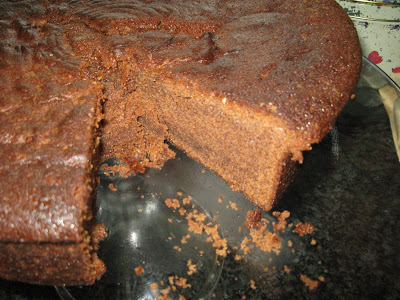 Flourless Chocolate and Hazelnut Cake, this is the cake to give as a gift to someone diagnosed with gluten intolerance - it will make them feel a whole lot better about a life without flour!!  The cake was moist and full of nutty chocolaty flavours, it went down really well when I served it to visiting relatives, worked well with all ages. 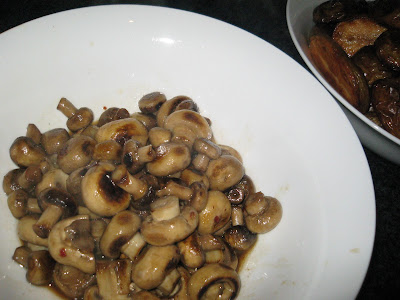 Bills Garlic Mushrooms were probably nothing you wouldn't do anyway (I get really annoyed with cookery books that contain really obvious recipes - ham sandwich anyone? - you know the sort of recipes I mean!!!) he just added some chili to the usual mushrooms, olive oil, garlic, salt and pepper.  To give him his due these excessively easy recipes were few and far between. 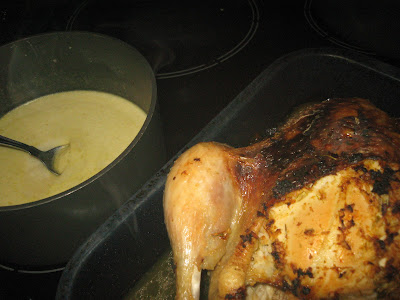 The Roast Chicken with Coriander Chili Stuffing and Coconut Gravy, was a real departure from the norm for me, and it was a welcome change - although it in no way replaces my usual roast chicken with lemon and garlic in my affections!!  As you can imagine chicken stuffed (under the skin) with chili, coconut, coriander, ginger, lime and sugar is jam packed with flavour and it really works.  This dish made for wonderful leftovers - I heated up the leftover chicken meat in the coconut gravy, added this to pasta - mighty good I have to say!!! 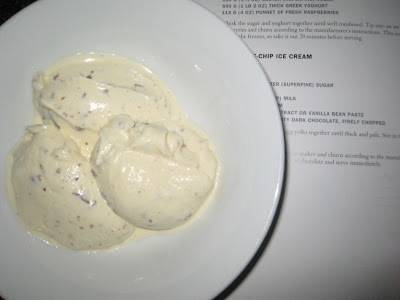 Chocolate Chip Ice Cream, it was great to try out my new ice-cream maker with this recipe, although nice it didn't reach the dizzy heights of the Raspberry Yoghurt Ice Cream - that said it was demolished in no time! 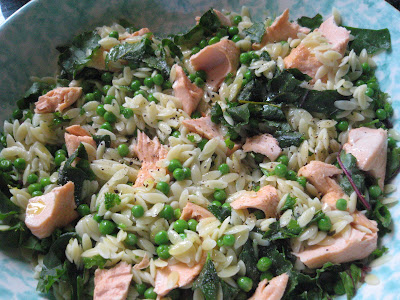 How pretty is this dish??  Poached Salmon and Risoni Salad was really tasty (and would be a great way to use up leftover salmon) I used some chard (from the veg box) instead of the specified spinach, and I think that the rougher texture of the chard worked really well, another one on the "make again" list. 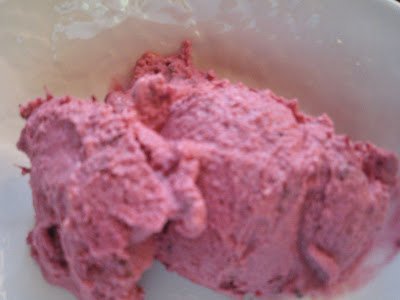 These recipes sound incredible. Now I'm hungry. I get tired of seeing very obvious recipes in cookbooks too, but I have overheard others talk about those kind of recipes as though they were something amazing. I guess to someone who hasn't cooked for long, they may help.
I'm going to try the raspberry-yoghurt ice cream as soon as I can get to the store for ingredients. My little girl saw the picture and started saying"yum!" I can't wait!

I don't know what to try first! But I know I'm now hungry!

Blimey BG you've been busy!! I wish I had an ice cream maker. And I wish I could eat yuor cherry pie! x

I love your long posts, by the time i hit the end their is drool all over my keyboard...highlights were the sweet potato and gluten free choco cake, it looks huge, big enough for me :-D

My goodness you have been busy! Your dishes look wonderful. I have this book but haven't used it much - it's a shame about the never fail chocolate cake - I had this book marked to make, but I don't think I'll bother now. Thanks for sharing all these mouthwatering photos!

Love your cookbook reviews! Everything looks so delicious!

Thanks for the review! I loved looking at Bill Granger's books when I was in London last summer. Unfortunately, they are a little harder to find here in the US.

WARNING!! don't read this if you're easily offended.... wow... another MEGA post from BVG... again, and I make no apology for this, but I really hate the lucky fuckers who get to eat all this lovely stuff... I bet they don't know how good they've got it... so tell them from me... they're bloody lucky!

Think I have to agree with Dom. Haven't really come across Bill Granger, other than hearing others talk about him - think you've done him proud.

Wow, that's a whole lot of yummy dishes! I wouldn't even know where to start :)

What a feast! They look so delicious.

Wow, you have been busy and it's a great feeling putting a cookbook to good use. Definitely have to try the Yoghurt and Raspberry Ice Cream!

these are all making me very hungry. they look amaizing:)

Everything looks great. I've watched Bill's Holiday on BBC America a few times and really enjoyed it. I'll have to seek out his cookbooks here. I'm definitely trying the yoghurt and raspberry ice cream. I do think it's funny that the only recipe that somewhat failed to lived up to expectations is the "never fail" cake (LOL). Isn't that always how it works?

Wow, all these recipes sound great. I make a Moroccan chicken dish in which I include preserved lemons. Yum! The eggless yogurt/raspberry ice cream really has me wowed. Gotta try that.

Wow.. little miss.. you have been busy.... I think it is fate that you and Bill have the same initials.... Brownieville...Girl! ha ha! I have never heard of this cookbook but I am always looking for new ones that actually have GOOD recipes... thanks for the inspiration. Sorry I have not been over lately to visit.. trying to keep up with this foodblog contest is a full time job... literally! xoxoxo Megan

Hey BVG - I responded to your comment on my blog but thought I'd respond here as well because I'm never sure if people go back and look at the comments again. Any suggestions you can give me for the tea would be great. For the one this month, they want specifics on history, how to brew a pot of tea, how to serve, how to present. I got the history off the internet and I think I can brew a pot of tea without problem but do you put the milk in the cup before the tea or after. Also, is it milk or cream? And, here at teas, they present the food on tiered trays but how would you present the food if you were having tea? Who serves the tea (or is it every man for himself)? How much food is served (here it's usually three types of sandwiches, scones and three desserts)? Those are a few of the questions they want me to answer and I can't find anything much about that on the internet.

Oh dear, am I invited? What an awesome spread and great recipes as well. Thanks so much for sharing. Have a nice day.
Kristy

I had a long reply typed up - but it disappeared!!!! Apologies.

BG, so glad you enjoyed Holiday with the push from me when I nominated it as our cookbook club review.

Did you make the cinnamon cream to go with the chocolate hazelnut cake? I would not usually have made such a thing, but it was a revelation. It works so well with any chocolate cake.

No I didn't make the cream - will have to try it soon as I love cinnamon.