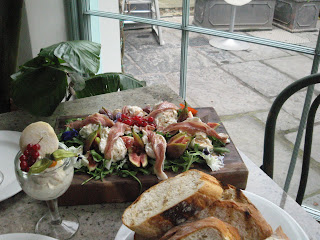 I had a lovely day yesterday, I headed over to Kilmacanogue to Avoca Handweavers for a cookery demonstration.  David "chefs don't burn things they caramelize them!" Roche was our chef/teacher for the morning, and although he professed having nerves for his first ever demonstration, none were evident.  It was an entertaining and educating experience (what a great combination).  David's demonstration was full of chefs tips - exactly what we were all after. 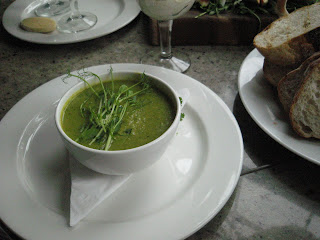 He started with a pea and coriander soup, his tip here was to add your pepper with the butter and oil at the very beginning, as you would any other spice (I would usually season further into the cooking process).  Aren't the pea shoots a beautiful garnish? 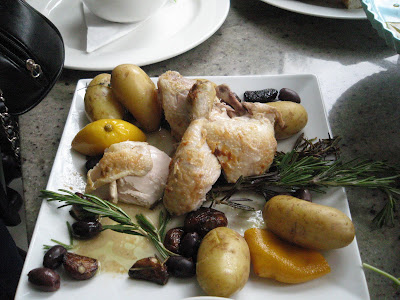 David also showed us a pot roast salted chicken with lemon and rosemary - my lesson here was not to be afraid of the amount of salt and oil in the recipe,  he used a good handful of Maldon salt and 250ml of olive oil.  I don't think I could have used that much salt on a chicken until I saw David doing so.  He also told us that although there was a large quantity of oil in the recipe, you can reuse it the next time you cook this chicken and that it keeps very well in the fridge. 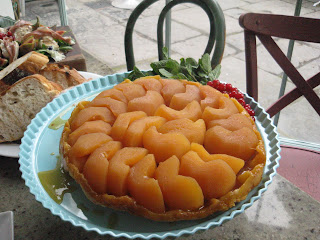 A fantastic Tarte Tatin was probably the most instructive part of the demonstration,  as smell plays a huge part in each stage of this dish.  I would never have had the nerve to allow the caramel get as dark as David did, and it was so much the better for it.  Then little pointers like bringing the caramel back to the simmer after the apple is added -  before covering  with the blanket of pastry.  Again allowing the tart to come up to heat before putting in the oven.  You know your tart is done when you start to smell appley caramel instead of baking pastry.  Finally and most importantly - don't turn out the tart for at least an hour after taking it from the oven.  Two reasons for this, safety... that caramel really burns! and because it tastes much better warm rather than hot. 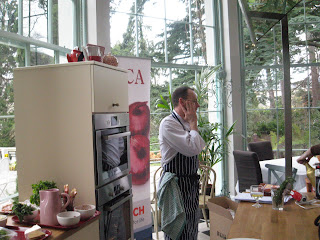 David in full flow.  You can see here the beautiful gardens at Avoca.
After the demonstration I spent far too long (and too much) in the shop, but everything is just so appealing!
I would like to thank everyone at Avoca for a really enjoyable morning.
Apple Tarte Tatin
75ml       water
100g       vanilla caster sugar
20g         butter
5             golden delicious apples peeled, cored and halved
250g       all butter puff pastry (defrosted)
Preheat the oven to 200 C
In your oven proof pan of choice (fairly small - just big enough for the apples to fit snugly) place the water and sugar over a high heat. Simmer until the syrup becomes a dark golden colour.  It is really important not to stir as this forms crystals in the caramel. (and we don't want that!)
Stir in the butter, again swirl rather than stir.
Place the apples in the caramel as attractively as possible.  David put them on their sides.
Wait for the caramel to come back to a bubble, then place the pastry over the pan tucking it around the outside of the apples.
Again continue on the heat until the caramel bubbles, and then place in the oven for about 20 minutes.
When the pastry looks and feels cooked and when you can smell the appley caramely sauce, remove from the oven (remember to use a cloth) and leave aside to cool.
When ready to serve turn your tart very carefully onto a plate.  (I intend to go outside for this bit!!!)
Enjoy!
Posted by Brownieville Girl at 8:26 AM

Ha! i love this post!!
"chefs don't burn things they caramelize them"
I thought i was the only one who used this theory!

they should so create scratch and sniff blogs! that soup looks delicious :)
Great post :D

MMMm all looks and sounds delicious:) Glad you had such a lovely time! Watcha buy please????:)

I bought a colander that will fit easily in the dishwasher (how lazy am I!!), a bottle of really good olive oil, black olive tapenade, two little tubs of food colour paste, balsamic vinegar, sun dried tomato and cheese scone (Yum) selection of salads (to taste and try to copy!) some chocolate spoons and chocolate!!!

I also himmed and haawed over a lovely microplane grater (I have one but this one looked better) but decided it was an extravagance too far!!

Not lazy at all BG, I cram my colander into the dishwasher. Actually I cram in anything that fits!