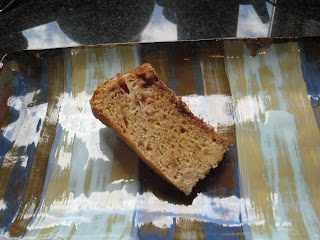 I should have known - if you tell people that something is good (better) for them - they won't choose to eat it!!!

I made a completely fat free cake for the coffee morning as a friend who is due to go to hospital to have her gall bladder removed was coming, and I wanted to serve something she could eat.  (I also thought it would to appeal to anyone on a diet) As it turned out S. ended up spending the morning in A+E (she is fine) so unfortunately she didn't get to try her cake.

When people came in first, I explained that the rhubarb cake was fat free, they all said what a good idea and then chose something else to eat!!  People who subsequently arrived were far more likely to choose it!!!
I thought that this cake was very nice, and would have no hesitation in making it again - I would lower the amount of sugar, but other than that I would leave as is.

The cake has a lovely moist texture, the pieces of rhubarb give a nice sharp contrast to the sweet soft sponge, and then the cinnamon topping brings a lovely crunchy change in texture.

I found the recipe on a site called Belly Bytes.  I did quite a bit of research, there are plenty of fat free recipes out there.  Many of the fat free recipes contained whole eggs - therefore are not fat free, be careful!

Cream the apple sauce, sugars and egg.
Add the flour, salt, vanilla, soda, buttermilk and rhubarb.
Sprinkle the topping on top.
Bake for about 50 minutes - until a cake tester comes out clean.

I have friends who say they prefer not to eat dairy so if I have a party I go to inordinate lengths to try and make some yummy foods with no cheese, butter or cream AND they always but always go straight for the cheesy stuff and cream cakes!

I'm a big fan of butter, but I bet this was lovely and moist with the apple and rhubarb.

BG the ingredients do sound yum. Would you serve it with yoghurt on the side?

I just started back on weight watchers and have spent most of my holiday weekend searching for wholesome, healthy, points-friendly recipes. I think this cake might fit the bill. I'll have to seek out some rhubard around here. I'll let you know if I make it.

Choclette, it was lovely and moist.

Saffy, yoghurt would be a great idea - it would cut through the sweetness.

Edie, you could use other fruit - blueberries would be very good or chunks of apple. Best of luck with WW.

I will try this look nice!! gloria

This sounds lovely and I definitely would have had a slice if I'd been there! It sounds like a good way to use rhubarb - I've never cooked with it before.