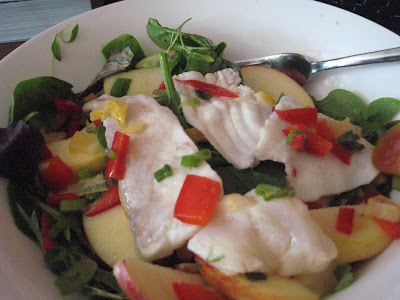 The idea of ceviche has been creeping up on me ... Nigella has one in her Express book, there is a lovely recipe in Tessa Kiros's Venezia (my two favourites in one book - cooking and Venice!)... I decided to dip my toe in the ceviche sea (in a manner of speaking), when I came home from the fishmonger with more than enough lemon sole for dinner.

I just wanted to make a small amount (not sure how fish cooked by lime juice would go down with the family) so I  cut up a small sole fillet, and added some monkfish (which I had bought for the following day's dinner) and placed them in the marinade.

I marinated the fish for 24 hours, testing and tasting after 6 hours and then 12 hours and again after 18 (it still had a raw texture) but 24 hours was probably about 4 too many as although it tasted fantastic, the texture was a bit tough.  The ceviche would make a lovely starter, but I would cut the fish up much smaller and marinade for a shorter time.

The monkfish probably took better to this cooking method (texture wise) but both fish tasted fresh, zingy and pleasantly different.

For one portion I used:

Mix the marinade ingredients and pour over the fish, store in a sealed container in the fridge until ready.

Serve with your salad of choice, I used rockett, spinich, red peppers and apples, dressed simply with lemon and oil. 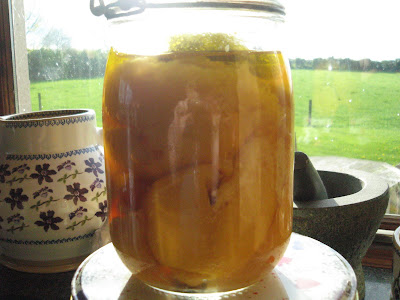 This is my jar of recently resurrected preserved lemons.  The photo alone makes my mouth water!!!

I turned to Diana Henry's "Crazy Water Pickled Lemons"  (where else?!) when looking for a recipe to make my lemons, and this one is excellent, the cinnamon and coriander giving a nice undertone to the flavour.

Preserved Lemons
(every home should have them!!)

Wash and dry the lemons.
Not cutting the whole way through, cut the lemons length ways in quarters.  It is important to keep the base of the lemon intact, so that the lemon opens out like a flower.
Hold each lemon open and fill with about 2 tsp salt, squeeze it closed and put into a sterilized jar.
Repeat until your jar is jam packed full.
Put a weight on top (I used a stone wrapped in clingfilm)
Put away for 3 days while the juices run out.
Remove the weight and add the cinnamon, pepper, coriander and bay leaves.
Add enough extra lemon juice to cover the lemons.
Then pour a layer of olive oil on top - this prevents the whole jar going mouldy - very important!

Ready to use in about 6 weeks.


Enjoy!
Posted by Brownieville Girl at 11:33 AM

I've never heard of preserved lemons before reading your blog. What kind of things would you use them for?

They are wonderful with fish - my favourite way is to bake monkfish stuffed with preserved lemons, tomatoes, herbs and olives.

They are used in Moroccan tajines and are also great roasted with mediterranean vegetables.

I really love the bitter salty edge they give to a dish (although I can eat them on their own!!)

These look delicious BVG - The view from your window is just lovely! - where abouts in Ireland do you live?

Thanks Lucie, I live about an hour from Dublin, but it's very rural - best of both worlds!!

Your dish looks delicious! I have been tempted to make the preserved lemons again, I did once a while back just to see, but never used them for some reason! I love Tessa Kiro's cookbook, love her recipes and her pictures are divine!

You're from Ireland? How exciting! And the photo out your window is lovely.
Of course, the preserved lemons are too. :)
I would love to make these....great idea.

Ceviche is one of our favorites...of couse living in Florida we get fresh seafood all year long so it makes it simpler to put it together. How did your family end up liking it?

BTW: thanks for visiting my blog!

DD, I totally agree, her books are wonderful, you could use Venezia as a coffee table book.

Barbara, Ireland not feeling very exciting at the moment! Weather all over the place, sun to rain to sun to hailstones today!

Raw fish marinating in a good quality citrus blend will make delightful ceviche. I am glad that you discovered that it takes overnight to really capture the flavor.
What I am really captured by is your recipe for preserved lemons. Delicious. I am planning to make that too. Looks awesome. Thanks for sharing,

This is a very dish for me....I made some preserved lemons last year..sadly, no one liked it...then again, I didn's use the spices you have listed here, but just SALT....maybe I shall try again.

Has anyone told you lately how HOT your food styling is?? :) And I love preserved lemons too. Even making them. It's fun!

Wow! Wow! I am going to make the preserved lemons for sure. The pic from your window is so lovely. You are so blessed to live in such a beautiful place. One day, I would love to go to Ireland! Dreaming!

BVG - I was wondering if you could help me...I'm trying to make custard from Bird's custard mix but the instructions on the tin aren't great. From the internet, I figured out on the hob is the on the stove but if I use the amount of liquid called for, the mixture is very thin when warm. I cut down the milk to 1 1/2 cups and when cool, it was still thinish and not really sweet. Is that how it's supposed to be? I'm used to our thick sweet puddings.

Velva, I hope you enjoy the preserved lemons as much as I do!

Angie - they are an acquired taste, but I think they are a bit like anchovies - they add a nice note to a dish if used in small quantities.

Angela, thank you - I really love living here, we lived in the city for years, it's so nice to get back to the country.

Edie, I'm no expert on custard but I think you probably have to add more of the mix to get a thick custard, also it will thicken more when cooled.
You need to add sugar at the beginning, 2 tbsp sugar to 2 tbsp of custard mix - more if you like it sweeter - Hope this helps (if not I can ask my Mum for more advice!)

Thanks BVG! I appreciate your help.